«I recalled how (…) I had streched out on the ground and let my bare feet slip from my shoes to caress the grass and how this direct contact with the earth had brought with it a sense of freedom and expansiveness, summer breaking down the usual boundaries between indors and out, and allowing me to feel as much at home in the world as in my own bedroom.»

«If our lives are dominated by search for happiness, then perhaps few activities reveal as much about the dynamics of this quest -and all its ardour and paradoxes- than our travels. They express, however inarticulately, an understanding of what live might be about, outside the constraints of work and the struggle for survival. Yet rarely they are considered to present philisophical problems (…) though the art of travel seems naturally to sustain a number of questions neither so simple nor so trivial and whose study might in modest ways contribute to an understanding of what the Greek philosophers beautifully termed eudaimonia or human flourishing.»

«One question revolves around the relationship between the anticipation of travel and its reallity.(…) We are familiar with the notion that the reallity of travel is not what we anticipate.»

Anticipation as an instrument of simplification and selection: «If we are inclined to forget how much there is in the world besides that which we anticipate, then works of art are perhaps a little to blame, for in them we find the same process of simplification or selection at work as in the imagination. (…) Which explains the curious phenomenon whereby valuable elements may be easier to experience in art and in anticipation than in reallity. The anticipatory and artistic imaginations omit and compress, they cut away the periods of boredom and direct our attention to critical moments and, without either lying or embellishing, thus lend to life a vividness and a coherence thst it may lack in the distracting woolliness of the present (…)»

About  A Rebours (J.-K. Huysmans, 1884): Duc des Esseintes, the misanthropic hero of this novel, after a trip to Holland, «ended up in the paradoxical position of feeling more in Holland – that is, more intensely in contact with the elements he loved in Dutch culture- when looking at selected images of Holland in a museum than when travelling with sixteen pieces of luggage and two servants through the country itself.»

Talking about Botton’s trip to Barbados: «A momentous but until then overlooked fact was making its first appearance: I had inadvertently brouht myself with me to the island. (…) It seems that, unlike the continuous, enduring contentment that we anticipate, happiness with, and in, a place must be a brief and, at least to the conscious mind, apparently haphazard phenomenon: an interval in which we achieve receptivity to the world around  us, in which positive thoughts of past and future coagulate and anxieties are allayed. But the condition rarely endures for longer than ten minutes.(…)
In another paradox that Des Esseintes would have appreciated, it seems we may may best be able to inhabit a place when we are not faced with the additional challenge of having to be there.
(…) wry wisdom of certain philosophers who walked away from prosperity and sophistication (…) argued, from within a barrel or mud hut, that the key ingredients of happiness could not be material or aesthetic, but must always be stubbornly psycological.

About Automat by Edward Hopper, «Hopper invites us to feel empathy with the wo 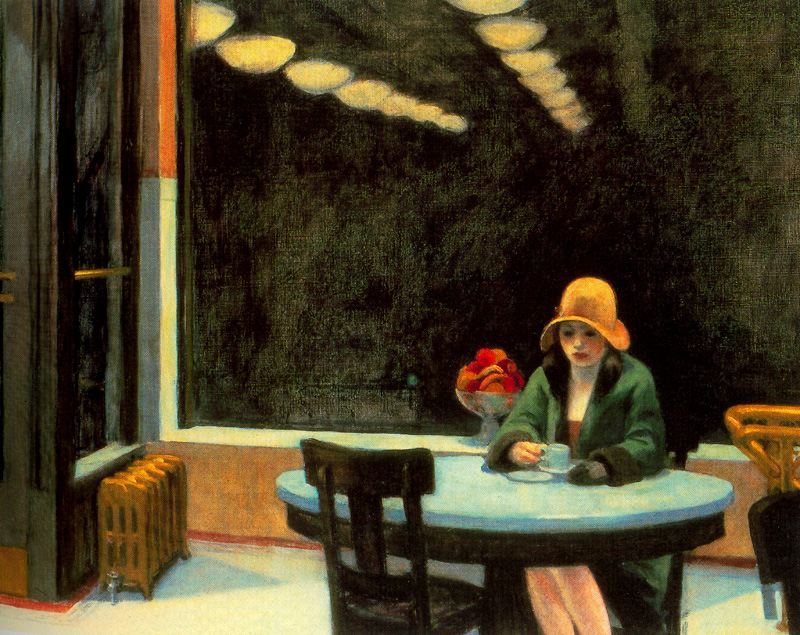 man in her isolation. She seems dignified and generous, only perhaps a little too trusting, a little naïve -as if she has koncked against a hard corner of the world. Hopper puts us on her side, the side of the outsiders againts the insiders. The figures in Hopper’s art are not opponents of home per se, it is simply that, in a variety of underfined ways, home appears to have betrayed them, forcing them out into the night or on to the road. The twenty-four hour diner, the station waiting room and the motel are sanctuaries for those who have, for noble reasons, failed to find a home in the ordinary world, sanctuaries for those whom Baudelaire might have dignified with the honorific «poets».

«Journeys are the midwais of thought. Few places are more conductive to internal conversations than a moving plane, ship or train (…) thinking improves when parts of the mind are given other tasks, are charged with listening to music, or following a line trees (…). At the end of hours of train-dreaming, we may feel we have been returned to ourselves (…) (because in our homes, in our ordinary lives) The furniture insists that we cannot change because it does not; the domestic setting keeps us tethered to the person we are in ordinary life, but who may not be who essentially we are.

The poetry of the service stations, motels, airports, etc: «If we find poetry (in them) is because (…) we implicitly feel that this isolated places offer us a material setting for an alternative to the selfish ease, the habits and confinement of the ordinary, rooted world.»